There are many modules in Python that provide very powerful features that we can use in our own programs. Some of these can send email, or fetch web pages. The one we’ll look at in this chapter allows us to create turtles and get them to draw shapes and patterns.

The turtles are fun, but the real purpose of the chapter is to teach ourselves a little more Python, and to develop our theme of computational thinking, or thinking like a computer scientist. Most of the Python covered here will be explored in more depth later.

Let’s write a couple of lines of Python program to create a new turtle and start drawing a rectangle. (We’ll call the variable that refers to our first turtle alex, but we can choose another name if we follow the naming rules from the previous chapter).

When we run this program, a new window pops up: 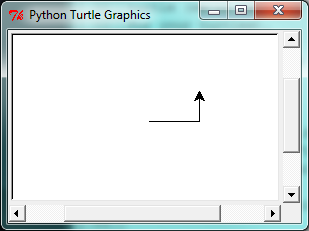 Here are a couple of things we’ll need to understand about this program.

The first line tells Python to load a module named turtle. That module brings us two new types that we can use: the Turtle type, and the Screen type. The dot notation turtle.Turtle means “The Turtle type that is defined within the turtle module”. (Remember that Python is case sensitive, so the module name, with a lowercase t, is different from the type Turtle.)

We then create and open what it calls a screen (we would prefer to call it a window), which we assign to variable wn. Every window contains a canvas, which is the area inside the window on which we can draw.

In line 3 we create a turtle. The variable alex is made to refer to this turtle.

So these first three lines have set things up, we’re ready to get our turtle to draw on our canvas.

In lines 5-7, we instruct the object alex to move, and to turn. We do this by invoking, or activating, alex‘s methods — these are the instructions that all turtles know how to respond to.

The last line plays a part too: the wn variable refers to the window shown above. When we invoke its mainloop method, it enters a state where it waits for events (like keypresses, or mouse movement and clicks). The program will terminate when the user closes the window.

An object can have various methods — things it can do — and it can also have attributes — (sometimes called properties). For example, each turtle has a color attribute. The method invocation alex.color("red") will make alex red, and drawing will be red too. (Note the word color is spelled the American way!)

Quite a number of methods exist that allow us to modify the turtle and the window objects. We’ll just show a couple. In this program we’ve only commented those lines that are different from the previous example (and we’ve used a different variable name for this turtle):

When we run this program, this new window pops up, and will remain on the screen until we close it. 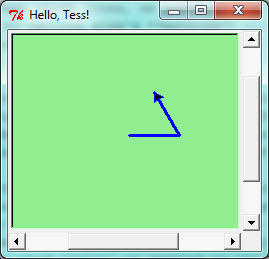 Just like we can have many different integers in a program, we can have many turtles. Each of them is called an instance. Each instance has its own attributes and methods — so alex might draw with a thin black pen and be at some position, while tess might be going in her own direction with a fat pink pen.

Here is what happens when alex completes his rectangle, and tess completes her triangle: 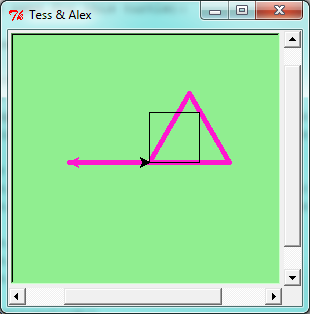 Here are some How to think like a computer scientist observations:

When we drew the square, it was quite tedious. We had to explicitly repeat the steps of moving and turning four times. If we were drawing a hexagon, or an octogon, or a polygon with 42 sides, it would have been worse.

So a basic building block of all programs is to be able to repeat some code, over and over again.

Python’s for loop solves this for us. Let’s say we have some friends, and we’d like to send them each an email inviting them to our party. We don’t quite know how to send email yet, so for the moment we’ll just print a message for each friend:

When we run this, the output looks like this:

3.4. Flow of Execution of the for loop

As a program executes, the interpreter always keeps track of which statement is about to be executed. We call this the control flow, of the flow of execution of the program. When humans execute programs, they often use their finger to point to each statement in turn. So we could think of control flow as “Python’s moving finger”.

Control flow until now has been strictly top to bottom, one statement at a time. The for loop changes this.

Flowchart of a for loop

Control flow is often easy to visualize and understand if we draw a flowchart. This shows the exact steps and logic of how the for statement executes. 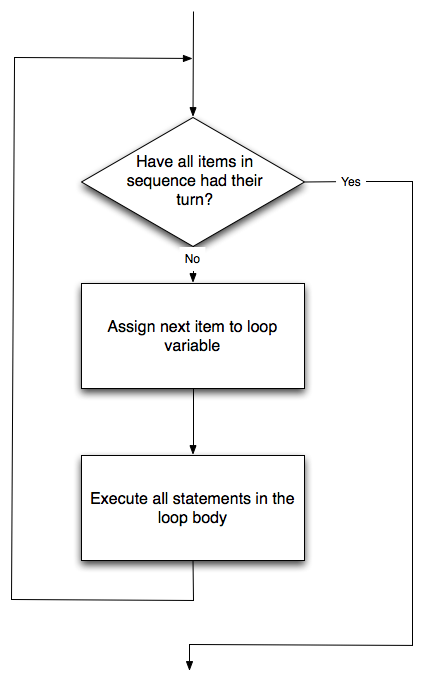 3.5. The loop simplifies our turtle program

To draw a square we’d like to do the same thing four times — move the turtle, and turn. We previously used 8 lines to have alex draw the four sides of a square. This does exactly the same, but using just three lines:

So to repeat something four times, a good Python programmer would do this:

By now you should be able to see how to change our previous program so that tess can also use a for loop to draw her equilateral triangle.

But now, what would happen if we made this change?

A variable can also be assigned a value that is a list. So lists can also be used in more general situations, not only in the for loop. The code above could be rewritten like this:

Turtle methods can use negative angles or distances. So tess.forward(-100) will move tess backwards, and tess.left(-30) turns her to the right. Additionally, because there are 360 degrees in a circle, turning 30 to the left will get tess facing in the same direction as turning 330 to the right! (The on-screen animation will differ, though — you will be able to tell if tess is turning clockwise or counter-clockwise!)

This suggests that we don’t need both a left and a right turn method — we could be minimalists, and just have one method. There is also a backward method. (If you are very nerdy, you might enjoy saying alex.backward(-100) to move alex forward!)

Part of thinking like a scientist is to understand more of the structure and rich relationships in our field. So revising a few basic facts about geometry and number lines, and spotting the relationships between left, right, backward, forward, negative and positive distances or angles values is a good start if we’re going to play with turtles.

A turtle’s pen can be picked up or put down. This allows us to move a turtle to a different place without drawing a line. The methods are

Every turtle can have its own shape. The ones available “out of the box” are arrow, blank, circle, classic, square, triangle, turtle. 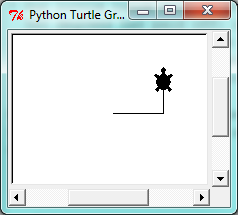 We can speed up or slow down the turtle’s animation speed. (Animation controls how quickly the turtle turns and moves forward). Speed settings can be set between 1 (slowest) to 10 (fastest). But if we set the speed to 0, it has a special meaning — turn off animation and go as fast as possible.

A turtle can “stamp” its footprint onto the canvas, and this will remain after the turtle has moved somewhere else. Stamping works, even when the pen is up.

Let’s do an example that shows off some of these new features: 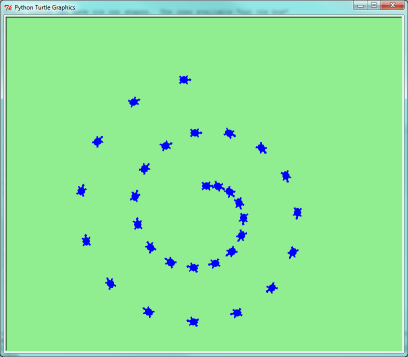 Be careful now! How many times was the body of the loop executed? How many turtle images do we see on the screen? All except one of the shapes we see on the screen here are footprints created by stamp. But the program still only has one turtle instance — can you figure out which one here is the real tess? (Hint: if you’re not sure, write a new line of code after the for loop to change tess‘ color, or to put her pen down and draw a line, or to change her shape, etc.)

attribute
Some state or value that belongs to a particular object. For example, tess has a color.
canvas
A surface within a window where drawing takes place.
control flow
See flow of execution in the next chapter.
for loop
A statement in Python for convenient repetition of statements in the body of the loop.
loop body
Any number of statements nested inside a loop. The nesting is indicated by the fact that the statements are indented under the for loop statement.
loop variable
A variable used as part of a for loop. It is assigned a different value on each iteration of the loop.
instance
An object of a certain type, or class. tess and alex are different instances of the class Turtle.
method
A function that is attached to an object. Invoking or activating the method causes the object to respond in some way, e.g. forward is the method when we say tess.forward(100).
invoke
An object has methods. We use the verb invoke to mean activate the method. Invoking a method is done by putting parentheses after the method name, with some possible arguments. So tess.forward() is an invocation of the forward method.
module
A file containing Python definitions and statements intended for use in other Python programs. The contents of a module are made available to the other program by using the import statement.
object
A “thing” to which a variable can refer. This could be a screen window, or one of the turtles we have created.
range
A built-in function in Python for generating sequences of integers. It is especially useful when we need to write a for loop that executes a fixed number of times.
terminating condition
A condition that occurs which causes a loop to stop repeating its body. In the for loops we saw in this chapter, the terminating condition has been when there are no more elements to assign to the loop variable.